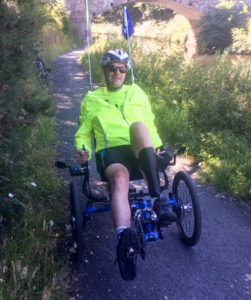 Here is Pete’s story which he has kindly shared with us. We hope it is a source of inspiration for others. Cycling for all!

“In 2015 I suffered a subarachnoid brain haemorrhage leaving me completely paralysed on the left side of my body. Determined not to allow this affect me too much I set a number of goals: to get walking, hill walking, running & cycling again.

Through my brain rehabilitation team I achieved the first goal, albeit walking with a stick & a limp. However, as cycling has always been a passion of mine, I really wanted to get on my bike & get cycling again with my friends on weekend social rides & charity rides.

After trying balance bikes & standard bikes it was quite obvious that with little or no use of my left arm & limited use of my left leg, balance was going to be a big barrier to getting cycling again & improving my fitness. As I looked into various disability cycling options, it became clear to me that an adapted trike would be the best way forward. After much research I got in touch with Blazing Saddles & FABB Scotland & they put me in touch with the West Lothian Council All Ability Cycling project team. After speaking with the Health Improvement Team & volunteers who ran this project, I was encouraged to attend the Monday afternoon sessions so I could understand what options were available for all ability & inclusive cycling.

As soon as I arrived at my first session the team welcomed me & discussed what options they had available and would suit me. Almost immediately they went to work selecting a suitable trike that I could use, making the necessary adjustments to adapt the chosen trike for my needs & use. From then on I came to the afternoon sessions for 8 weeks. At that time, the sessions were run in Broxburn in West Lothian, giving plenty of opportunities to try out the trike on different terrains. This helped me build my confidence as well as work with the fantastic team who were helping me to get back into cycling.

After about 8 weeks of attending the sessions I was offered the loan of the trike I had been using, which was fantastic. I completed the necessary paperwork, which was straight forward, simple and easy to understand & the bike library team would continue to support me. Being a non-profit organization we arranged a suitable time for them to drop the trike off at my house where I stored it. During the loan of the trike, almost immediately, I was able to go on weekend social rides along the union canal towpath with my friends & family, who are all able bodied. This also allowed me to build my confidence as well as the social & physical benefits that all ability cycling provides.

After a few weeks of riding from Linlithgow, I was able to ride as far as Broxburn & then Ratho (for cake & coffee!). The  next step for me was to look at whether the trike I was borrowing would be a long term option for my needs, so through the suggestion of  the team I went to other All Ability hubs to try out various options.

An important criteria for me in selecting a bike was to be able to go on days out with my family to places like Loch Katrine. That meant on days out, I would need a trike that would fold. So after much research I found a suitable trike that folded & more importantly at an affordable price. The Library very kindly extended my hire until such time that I had bought my new trike.

I went ahead & purchased my foldable trike. This has given me even more freedom. Without the Bike Library’s help, I would not have been able to even contemplate getting back cycling, but they gave me the confidence & equipment to help get me back into cycling socially, increasing my fitness at the same time.

Although I didn’t purchase the same model of trike I used from the Bike Library, in my opinion, the West Lothian Bike Library & West Lothian Health Improvement Team restored my belief & provided a platform for me to continue with my road to recovery. It has helped me to get out with family & friends again, doing something I love.” 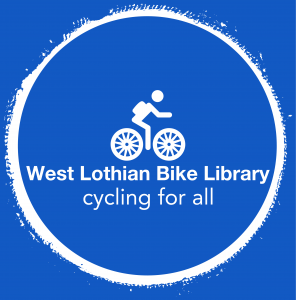 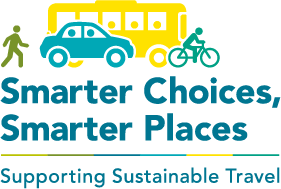